So I haven't made a post since like last week or whenever, but that's not my problem. However here I am with a new post that will surely blow your minds! That's right, it's a couple of pictures of what my immediate surroundings look like when I sit down to write something. I figured you are just dying to see this, so here's what's up! 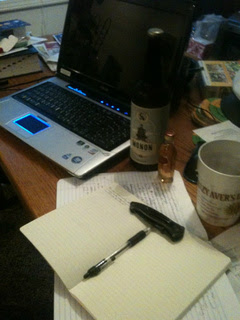 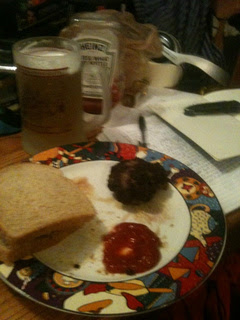 In this second picture we can tell I've made a good amount of progress from the first
picture. I not only opened the large bottle of beer, I also poured it into a glass. Also at some point I managed to capture a few wild hamburgers in the wild, one was eaten before I took this picture.
Yes, they were all very delicious. 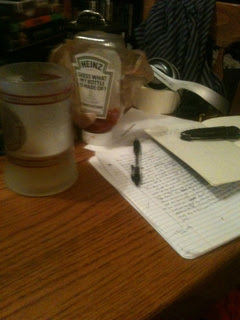 Here, I have almost reached the end of my writing for today. I know this, because the beer is almost gone. There's a direct correlation there possibly. Also, note how the pen has not changed position. That's because I am so good at writing that I never need to actually write. It's true
Posted by Trey at 5:09 PM No comments:

Okay so there I was, needing to work on homework but of course that's just no fun, so I sat at my table flipping through twitter. I have a twitter, in case you didn't know. Anyway, I was flipping through twitter, when I noticed a trend. Not a trending topic, I never pay attention to those.
The trend is that my arty farty friends like to live stream things. And for those of you who are too cool for internet stuff, live streaming is where you stream a video of you doing a thing, live. Clever how they got that name right? Right. So I got to thinking, I've never watched one of these live streams. That thought of course led to another thought, a genius thought, a million dollar thought.
What if I live streamed me writing a poem?!
I know right? Genius idea, like I said. Then I took a look at myself and what I was doing and thought about how that would look to someone watching online. For the record, the picture was this: notebook open, one line jotted down, whiskey and coke next to the computer, poet leaning back flipping through twitter on his phone when the kitchen timer goes off, letting him know his Kroger brand macaroni and cheese is done. He then gets super excited and squeals like a teenage girl at a Backstreet Boys concert (don't tell me this reference is old I don't need to feel old). So I was thinking about this image, picturing myself eating Kroger mac and cheese right out of the pot with a bottle of cheap coke and cheaper whiskey next to me I realized my mistake. This wasn't a million dollar idea, it was a billion dollar idea. It could possibly change everything about literature, screw the trochee's heave or whatever, this is it. This, right here and right now. Finally the world could see how literature and poetry is written.
But then I thought about it again and realized how boring and depressing it would be. For both the writer and the person watching. Really, who would want to see that?
(my twitter is @troubadourtofu if you want to know. it might be offensive sometimes so uh)
Posted by Trey at 5:54 PM No comments: